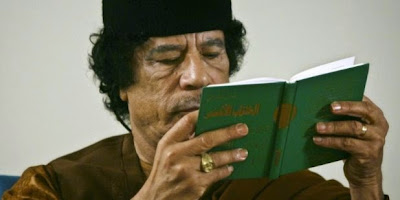 The following are ten things Africans and the world need to remember about Libya's Ghaddafi:

1. In Libya a home is considered a natural human right

In Gaddafi’s Green Book it states: ”The house is a basic need of both the individual and the family, therefore it should not be owned by others”. Gaddafi’s Green Book is the formal leader’s political philosophy, it was first published in 1975 and was intended reading for all Libyans even being included in the national curriculum.

2. Education and medical treatment were all free

Under Gaddafi, Libya could boast one of the best healthcare services in the Middle East and Africa. Also if a Libyan citizen could not access the desired educational course or correct medical treatment in Libya they were funded to go abroad.

The largest irrigation system in the world also known as the great man-made river was designed to make water readily available to all Libyan’s across the entire country. It was funded by the Gaddafi government and it said that Gaddafi himself called it ”the eighth wonder of the world”.

Ghaddafi's eighth wonder of the world

4. It was free to start a farming business

If any Libyan wanted to start a farm they were given a house, farm land and live stock and seeds all free of charge.

5. Bursaries were given to mothers with newborn babies

When a Libyan woman gave birth she was given 5000 (US dollars) for herself and the child.

Electricity was free in Libya meaning absolutely no electric bills! Yup, you heard right... that which the West could not do for its citizens Ghaddafi was already doing for his people.

During Gaddafi’s reign the price of petrol in Libya was as low as 0.14 (US dollars) per litre.

8. Gaddafi raised the level of education

Before Gaddafi only 25% of Libyans were literate. This figure was brought up to 87% with 25% earning university degrees.

9. Libya had It’s own state bank

Libya had its own State bank, which provided loans to citizens at zero percent interest by law and they had no external debt.

This was a common African currency that Ghaddafi yearned to introduce for Africans. It's introduction would have been a nightmare for the West as it would have allowed for Africans being truly independent and free from the usury financial products of the West. The Dinar would have made Africa free from the yoke of Western imposed debt that allowed for its natural resources to be captured for pennies.

Gadaffi was one helluva dude! Love him, hate him, he sure was something... in some strange way I miss him already, and that's God's truth.

eToro is the most recommended forex broker for newbie and advanced traders.