The Gaza slaughter in pictures 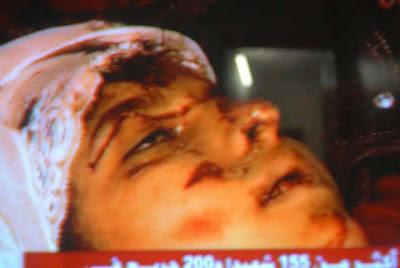 Images of Lebanon back to haunt the world; courtesy of a killer rogue nation?

When Muntazer al-Zaidi, an Iraqi journalist, shouted, "It is the farewell kiss, you dog" to Bush and threw him his shoes during a news conference in Baghdad, the curtain of hypocrisy fell and the ugly emperor stood naked in front of the world.

Those shoes however were not aimed only to a man who should be - by his own standards - hanged, together with his entire junta of mass murderers; the Iraqi hero hit to the face all those responsible for the Iraq genocide and its ongoing denial; an endless army of politicians, diplomats, generals, businessmen, journalists, intellectuals and pimps who've helped to carry out the crime of the century. Shoes for all!

Shoes for the United Nations that instead of protecting one of its members from the supreme international crime that organization has been founded to prevent, collaborated with the occupation and its crimes.

Shoes also for the lib-left intelligentsia, the anti-war movement's politburo, the human rights paladins and the court of eunuchs who have worked as gatekeeper of dissent and helped to sell the products of the crime of the century; the supporters of the "political process", of the sectarian Quisling government, of the militias of drillers and all those who rejoiced for the capture and lynching of Saddam Hussein and his government. Shoes for all!

Shoes for Human Rights Watch that contributed to the propaganda campaign that made possible the invasion of Iraq, rejoiced and praised the US occupation for the capture of its president and still keep denying the Iraq genocide.

Shoes for Iraq Body Count that's made possible the denial of the Iraq genocide by its perpetrators and their propaganda apparatus.

If you search shoes and Iraq, here is how Google shows two BBC stories on December 14, five years apart (they came up together like this at the top of my search):

BBC NEWS | Middle East | Shoes thrown at Bush on Iraq trip
Dec 14, 2008 ... President Bush's farewell visit to Iraq is marred by an incident in which two shoes are thrown at him during a news conference.
news.bbc.co.uk/2/hi/middle_east/7782422.stm - 8 hours ago

It's really a pity that Cole couldn't find a third BBC article about shoes on Google, The day Saddam's statue fell:

"Down, down, Saddam," said one man, frenziedly interrupting my piece to camera so we should see him use his shoe to repeatedly strike the face of the statue, which had come down a few moments earlier.

Of course in that case even Juan Cole should have explained (to) his readers that that event, the pulling down of Saddam Hussein's statue, was a staged media event organized by the US occupation and its stooges...

Appalling, even for Western propaganda's standards. Appalling but not surprising. It was Juan Cole after all who supported and then justified the vicious military campaign against Fallujah, "there were very bad characters there".

It was Juan Cole who helped to sell the lynching of the legitimate president of Iraq even a few hours before that horror show took place.

Appalling but not surprising; Juan Cole has always been biased against the Sunni Iraqi community and helped to sell his readers the New Iraq.

Back to the brave Iraqi journalist Montadhar Al-Zaydi; he has shown to the world the emperor is naked. He's been now taken hostage in his own country by the sectarian Quisling government of the Green Zone. Not only should he be released immediately; he must be honoured by any decent human being as a hero.