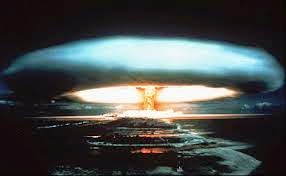 "Obama's State of the Union address was clinically insane, filled with the most corrupt, rotten, foolish, idiotic statements. And what was worse, the audience was cheering him on like a pack of idiots. It was an echo of the Nuremberg Rallies of Nazi Germany."

"This is why we are facing an immediate danger of thermonuclear war."~~LaRouche.

[LaRouche]Wall Street is on the edge of another financial tsunami, and this is driving the world towards general war, with the latest provocations in Ukraine serving as the immediate trigger for confrontation with Russia.

As Citibank was the latest of the Wall Street too-big-to-fail banks to post serious fourth-quarter losses, and as the Wall Street banks were announcing 50,000 layoffs, half-way around the globe the Ukrainian government was launching new provocations against Russia, meeting with top NATO generals and announcing a draft to call up 100,000 new troops to launch a military offensive against its own citizens in eastern Ukraine.

Russian officials have made clear that, while they are pushing for a diplomatic solution to the crisis in eastern Ukraine—starting with an immediate cease-fire and a resumption of direct talks between Kiev and the eastern Ukrainian leaders—they will not cave in to NATO blackmail. In statements on Wednesday, both Foreign Minister Lavrov and Putin spokesman Peskov made clear that they understand the NATO actions to be nothing short of an all-out campaign to overthrow Putin and make Russia the victim of the latest color revolution. This kind of madness can lead the world to thermonuclear extinction at any moment.

Russia has boosted its strategic strike capability and announced a new military doctrine, making clear that they understand the nature of the asymmetric assault on the current Russian leadership.

Lyndon LaRouche, in discussion with his Policy Committee colleagues on Wednesday, emphasized that Russia is prepared to respond preemptively to the ongoing US and NATO provocations, and this can mean the obliteration of the United States if the current Obama trajectory is not ended now. That, he clarified, means crushing Wall Street, which is the driving force behind the imminent war danger. 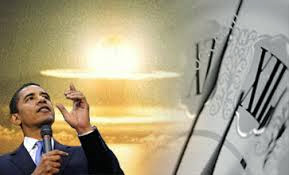 President Obama's Tuesday night State of the Union Address contained blatant provocations against both Russia and China, and his words did not go unnoticed in Moscow and Beijing. It was a disgusting Nuremberg Rally, with Democrats groveling in front of a president who has destroyed the party and the country—on behalf of Wall Street and London.

"Obama's State of the Union address was clinically insane, filled with the most corrupt, rotten, foolish, idiotic statements. And what was worse, the audience was cheering him on like a pack of idiots. It was an echo of the Nuremberg Rallies of Nazi Germany."

"This is why we are facing an immediate danger of thermonuclear war."

Wall Street and London are not only bankrupt, facing an immediate blowout of their quadrillion-dollar derivatives bubble. They are driven by the belief that war can be the solution to their imminent demise, which makes them pathologically dangerous to the very survival of the human race.

It is in this context that the Wall Street rally by the LaRouche Political Action Committee on January 20 brought reality to the heart of the financial district. Thousands of passers-by were confronted with the reality of the Wall Street bankruptcy, the war danger, and the urgent need to revive the Hamiltonian alternative, starting with the immediate reinstatement of Glass- Steagall.

It is that option, alone, that can set the world as a whole, back on a course of development, which is now already underway with the initiatives of the BRICS countries, led by China. At this week's World Economic Forum at Davos, Switzerland, the role of China in launching a new global economic paradigm is being openly admitted.

The vital question is whether the reality of the imminent war danger and the role of Wall Street and London in pushing the planet to the brink of annihilation will be acknowledged and acted upon in time.