Obama Threatens All Of Humanity 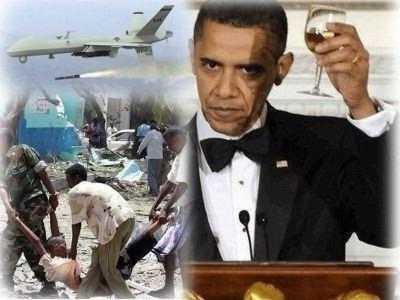 He represents the worst of rogue governance. He does so lawlessly. He serves monied interests. They own him. Whatever they want they get.

He's waging multiple imperial wars. He's doing so on humanity. He plans others.

He looted the nation's wealth. He handed it to Wall Street, war profiteers, and other corporate crooks.

He governs by diktat. He permits lawless torture. Global renditions persist on his watch.

He institutionalized tyranny. He authorized indefinitely detaining anyone called a national security threat without charge or trial (including US citizens).

"In all criminal prosecutions, the accused shall enjoy the right to a speedy and public trial, by an impartial jury of the State and district wherein the crime shall have been committed, which district shall have been previously ascertained by law, and to be informed of the nature and cause of the accusation; to be confronted with the witnesses against him; to have compulsory process for obtaining witnesses in his favor, and to have the Assistance of Counsel for his defence."

The Constitution mandates ALL criminal prosecutions. Pentagon ones aren't exempt. High-profile ones are especially important. They attract world attention.

Laws are made to be obeyed. Obama spurns them. He does so with impunity. He targets anyone challenging rogue state power. He wants whistleblowers silenced. He wants Edward Snowden arrested, extradited and imprisoned.

He threatens retaliation against nations willing to help him. The 1961 Vienna Convention on Diplomatic Relations lets diplomats function freely. They can do so without coercion, harassment or interference. Host countries are mandated to protect them.

It's the basis of diplomatic immunity. It's considered milestone international relations legislation. Through June 2013, it has 189 signatories.

Host countries must grant all foreign officials free movement and travel throughout their territory. Treating them with respect is required.

All appropriate steps must be taken to do so. Inviolable law must be obeyed. No exceptions are permitted.

"The person of a diplomatic agent shall be inviolable. He shall not be liable to any form of arrest or detention. The receiving State shall treat him with due respect and shall take all appropriate steps to prevent any attack on his person, freedom or dignity."

If states want their diplomats treated lawfully, they're obligated to treat foreign officials the same way. International law mandates it.

Washington spurns it with impunity. It violates core constitutional and US statute law provisions. It operates extrajudicially. It does so unapologetically.

Evo Morales attended Moscow's second Gas Exporting Countries Forum (GECF). He said he's "ready to give political asylum to people who expose spying activities.If we receive a request, we are willing to consider it."

"We don't know who invented this lie. We want to denounce to the international community this injustice with the plane of President Evo Morales."

France and Portugal cancelled air permits, he explained. "They say it was due to technical issues, but after getting explanations from some authorities we found that there appeared to be some unfounded suspicions that Mr. Snowden was on the plane."

Their decision "put at risk the life of the president."

Morales was "kidnapped by imperialism," he added. He blamed EU complicity with Washington.

According to Defense Minister Ruben Saavedra:

"The ambassador for Spain in Austria has just informed us that there is no authorization to fly over Spanish territory, and that at 9AM Wednesday they would be in contact with us again."

Spain's government made "revision of the presidential plane" a condition for granting free passage.

Saavedra was aboard the flight. He was unequivocal. He pointed fingers the right way, saying:

"This is a hostile act by the United States State Department which has used various European governments."

Later he said France and Portugal reconsidered. They "changed their positions." Italy and Spain remained hardline.

"We will patiently seek to resolve the negative position taken by Italy and Spain, according to international norms," he added.

Early Wednesday, Bolivian officials rescheduled flight plans. They did so to return home. Obama officials were silent. Behind the scenes pressure targeted Morales. Complicit EU allies obliged. They did so disgracefully. They acted lawlessly.

Snowden's father Lon defended his son. He did so jointly with attorney Bruce Fein. They wrote Edward by open letter. It said in part:

"Thomas Paine, the voice of the American Revolution, trumpeted that a patriot saves his country from his government."

"You have forced onto the national agenda the question of whether the American people prefer the right to be left alone from government snooping absent probable cause to believe crime is afoot to vassalage in hopes of a risk-free existence."

"You are a modern day Paul Revere summoning the American people to confront the growing danger of tyranny and one branch government."

He exposed Director of National Intelligence James Clapper's lies. He committed perjury. He told Congress NSA doesn't spy on Americans. Obama let him get away with it without comment.

"We leave it to the American people to decide whether you or Director Clapper is the superior patriot."

"The history of civilization is a history of brave men and women refusing to bow to government wrongdoing or injustice, and exalting knowledge, virtue, wisdom, and selflessness over creature comforts as the North Star of life."

"We believe your actions fall within that honorable tradition, a conviction we believe is shared by many."

"As regards your reduction to de facto statelessness occasioned by the Executive Branch to penalize your alleged violations of the Espionage Act, the United States Supreme Court lectured in Trop v. Dulles (1958):"

"The civilized nations of the world are in virtual unanimity that statelessness is not to be imposed as punishment for crime."

"(W)e will be unflagging in efforts to educate the American people about the impending ruination of the Constitution and the rule of law unless they abandon their complacency or indifference."

"Your actions are making our challenge easier."

"We encourage you to engage us in regular exchanges of ideas or thoughts about approaches to curing or mitigating the hugely suboptimal political culture of the United States."

"Nothing less is required to pay homage to Valley Forge, Cemetery Ridge, Omaha Beach, and other places of great sacrifice."

Obama breaches inviolable international principles egregiously. He does so with impunity. None remain too sacred not to violate. Targeting patriots like Manning and Snowden reflect the worst of rogue state governance.

Snowden remains in limbo. Washington revoked his passport. It did so maliciously. He's stateless. He's a man without a country. No nation so far offered him asylum. Whether any will remains unknown.

He's punished for doing the right thing. Media scoundrels march in lockstep with lawlessness. They back ruthless Obama persecution. They do so disgracefully. They're apologists for injustice.

They called him a "naive hacker." Stop him at all costs, they urged. Prevent him "from leaking information that harms efforts to fight terrorism and conduct legitimate operations."

Snowden acted honorably, courageously and legally. He exposed lawless NSA spying. Doing so revealed what everyone needs to know. Washington doesn't fight terrorism. It commits it at home and abroad.

US law prohibits it except when legitimately protecting national security. America has no enemies. EU nations are allies. Times editors exclude what readers most need to know.

Wall Street Journal editors want Snowden's head. "(N)othing prevents him from returning to the US to demonstrate the courage of his transparency convictions," they said.

Mercy isn't in Washington's vocabulary. Media scoundrels condemn what deserves praise. Snowden's on his own for justice. It’s elusive. It remains for one or more world leaders to help. None officially did so.

Nicaragua, Venezuela and Bolivia have now offered Snowden asylum, remains to be seen how he is going to get to these countries.

Stephen Lendman lives in Chicago and can be reached at lendmanstephen@sbcglobal.net. You can visit his blog site at http://www.sjlendman.blogspot.com.

I hope Obummer realizes there will be hell to pay for his atrocities soon. Does he seriously think the white boy will be there to save his black ass?

He'll be the sacrifice to get others off the backs of white boy presidents. Not a doubt, he'll end up being thrown under some bus.

He's already been thrown under the bus K.Joe, right now, he's fighting like crazy to get out from under.