Searching for succor in New York 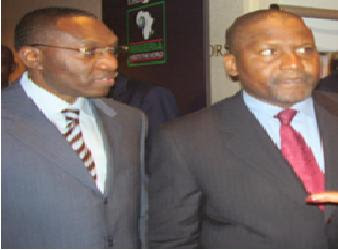 Searching for succor in New York

Reprieve will not be coming the way of detained CEO of UNIGATE investments, Sam Iwuajoku anytime soon, as lawyers of the Economic and Financial Crimes Commission (EFCC) obtained a court order to keep Mr. Iwuajoku in detention pending the determination of investigations concerning cases of economic sabotage and money laundering leveled against him.

Sam Iwuajoku, who is a business partner of Alhaji Aliko Dangote, was arrested last week for scamming the Federal authorities in Nigeria to the tune of N100 billion naira in unpaid import duties. In conjunction with former president Obasanjo and his top aides, Mr. Sam Iwuajoku obtained series of import duty waivers under the pretext of building power plants in the troubled Niger Delta region; however Saharareporters investigations showed that Mr. Iwuajoku was never involved in building power plants in the Niger Delta region.

Investigators told Saharareporters that the accused person was merely scamming the nation to import steel and rice that have no bearing to the purpose for which the duty waivers were granted in the first place. Before his arrest last week, Mr. Iwuajoku arranged for his private jet to be ferried out of Nigeria before the EFCC could lay their hands on it.

Also, four high caliber automatic weapons with several rounds ammunition were found in his house in Lagos. He has named top customs officials as well as Governor Bukola Saraki of Kwara State as his partners in the scam.

He reportedly mentioned that former senior aide to Obasanjo, Mr. Emmanuel “Andy” Uba was facilitating the import duty waivers from the office of the former president. Mr. Andy Uba and Aliko Dangote were both seen together in New York on Monday September 24th 2007 apparently on a trouble-shooting mission to save Sam Iwuajoku, sources at the Millennium UN Plaza Hotel where Yar'adua camped said he had series of meetings with some of the controversial businessmen who are subject of various degrees of money laundering investigations. This include, Mr. Mike Adenuga, the fugitive CEO of telecoms giant, GLOBACOM who currently lives in London after he fled from the Nigeria after he was arrested by the EFCC over his role in the PDTF scams.

This is coming on the heels of a declaration by the Federal finance minister earlier today that the Federal government will investigate past abuses of import duty waivers granted by the last administration of president Obasanjo.

Also in Aba today, the EFCC submitted its defense against the lawsuit brought by former Abia State governor, Orji Uzor Kalu which had become a subject of controversy between the Attorney General office and the EFCC. A source at the EFCC told Saharareporters that after submitting their defense to contest the lawsuit, the Judge adjourned the case till October 31st 2007 for further hearing. Contrary to the position of the Attorney General of the Federation, the Abia High Court judge did not discuss any issues regarding “contempt” of court at the proceedings. Lawyers to Orji Uzor Kalu also said they did not file any contempt proceedings yet against the EFCC. They also confirmed that the AG was never party to the suit from the onset.
Posted by Unknown at Sunday, September 30, 2007

Yes, I read that one and how he was lamenting that Forbes is recognizing Oprah instead of him as richest black person. The man must be a fool if he thinks Forbes can recognize a man when they don't know how he made his money. Can you now see the embarrassment Forbes would have suffered had they mentioned him as richest black person? The truth is beginning to expose him and we can now see how he made his billions by robbing Nigerians blind. A thief can never aspire to make the Forbes' list of richest persons, so he should go and sit down and wait for EFCC to catch up with him soon.

Aliko is not a thief, it is Uba and Obasanjo that offered him the greek gift of waivers to entice him into providing political patronage for them, it is them that are the thieves who robbed Nigeria blind not Dangote. The man has worked hard and good fortune smiled on him, it is unfair to be criticizing him because of that. If he is found to be the richest black person then Forbes must give him that respect or they will be seen as fake.

They sure have now :)