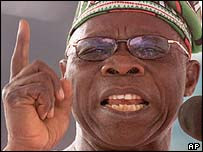 After months of claiming that there was nothing to allegations that some state governors contributed billions of naira towards the doomed third term project, officials of the Economic and Financial Crimes Commission seem to be abandoning that posture.

When embattled former Governor Saminu Turaki disclosed that he had handed N10 billion to Andy Uba, former President Olusegun Obasanjo’s closest aide, the EFCC publicly pooh-poohed the allegations. Turaki had stated in written and oral statements that Obasanjo directed him to make the funds available for the botched tenure extension project.

Despite the EFCC’s refutation, Saharareporters has been told by a knowledgeable source that Saminu Turaki stuck to his line. He reportedly told anti-corruption investigators that “Andy Uba knew how he spent the money,” a coded statement that led the EFCC to interrogate Uba as recently as two weeks ago.

The ex-Jigawa governor is said to have insisted that Andy Uba be thoroughly interrogated by security agencies to explain how he distributed monies taken from Jigawa State treasury for the purpose of bribing federal lawmakers to amend the constitution to enable Obasanjo to run for a third term in office.

Saharareporters had earlier reported that Andy Uba used part of the N10 billion to buy a mansion worth N2 billion from Alhaji A. Abubakar popularly known as “AA Oil.” Alhaji Abubakar is the owner of “A Group Properties Limited” in which Oceanic Bank was used as a front.

Our sources disclosed that when Saminu Turaki requested the huge cash withdrawal from Inland bank, the bank’s top officials, unable to honor such a huge demand, contacted former President Obasanjo for help.

Obasanjo then directed Dr. Charles Soludo, the CBN governor, to “see to it that the money was made available,” said our sources.

According to Saharareporters sources, Soludo personally organized bullion vans that transported the cash to Andy Uba at a secret location in Abuja. Uba and a few other presidential aides working on the third term project then distributed the cash to legislators.

The N10 billion “donation” was the beginning of what Saminu Turaki has privately described to close confidantes as the biggest extortion carried out by the Obasanjo government.

Saharareporters learnt that when Andy Uba was quizzed over Saminu Turaki’s allegation, he “merely denied” the charges, telling EFCC operatives that Turaki was out to score a sensational point by linking him to an extortion.

Even so, our sources said the EFCC investigators believe that Uba knows more than he is letting on. 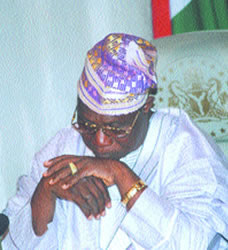 Uba, whose unexplained wealth is being quietly investigated by some elements within the Yar’Adua administration, has been advised by Obasanjo to lower his profile in Abuja in order to avoid attention.

But Obasanjo and Uba’s strategies may not work in the end, said our sources, stating that some members of Yar’Adua’s inner caucus have vowed to get to the bottom of the third term cash scandal—and other scandals around Obasanjo and Uba. “The EFCC is gathering more information, and Uba will be interrogated again,” our sources revealed.
Posted by Unknown at Tuesday, September 04, 2007