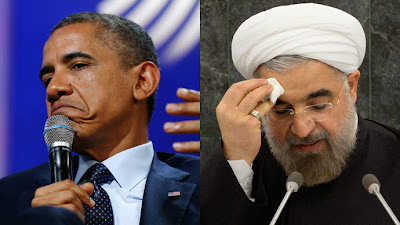 "Only a historic détente on an equal footing can rescue Obama’s disastrous foreign policy approach and his crumbling presidency.

Only when Obama feels the warmth of Iranian hospitality will he fully realize the extent of his foolish and unethical policies toward the Islamic Republic."~~ Nile Bowie

[RT.com] As political leaders in Washington and Tehran signal they are in favor of diplomacy, is a genuine rapprochement between the two powers actually possible?

The speeches at this week’s UN General Assembly by the leaders of Iran and the US, although each striking conciliatory tones, both envisage a vastly different international order. Recently-elected President Hassan Rouhani, in his first speech to the assembly, reiterated that the Iranian nuclear issue is essentially a red herring, while eloquently addressing the moral deficiencies of the international order as it exists today. He spoke of the human cost of sanctions that devastate communities and the most vulnerable members of society, the illogicality of militaristic pursuits of hegemony, and the need for an international order that rests upon nations existing on an equal footing and the primacy of international law. Rouhani called upon nations to form a peacemaking coalition that rejects extremism and warmonger coalitions. Rouhani’s words were not bellicose, but grounded in moderation and compassionate sensibilities that reflect a growing consensus of global opinion in favor of a truly multipolar world.

The Iranian president’s speech reflects a world view that Iranians themselves overwhelmingly favor, and those who voted him into office are the victors, as Rouhani has taken to the world stage and emerged as a true statesmen and a representative of his people. Unfortunately, this is the point where optimism turns into pessimism.

President Barack Obama’s speech, although conciliatory in some respects, was spoken through the lens of unilateralism and the mythology of exceptionalism that has dominated decision-making in the US for decades. Substantial elements of his speech were attempts to justify existing US policy, which is viewed as increasingly unsustainable and narrow throughout many corners of the world. In his 40-minute speech, Obama’s words reverberated in an Orwellian echo chamber, as the orator attempted to dress reactionary positions in the clothing of morality.

The undertones of the message signified an unwillingness to acknowledge evidence that is contrary to the White House’s stance (on Syria, for example), and a stubborn insistence that the forces of “progress” have a responsibility to protect people around the world from those leaders considered “tyrants” or “dictators” by a select few in Washington – a philosophy that is scantly more sophisticated than Bush’s “Us vs. Them” doctrine.

The American president transparently attempted to defend inherently intransigent policies and self-serving positions, and he made clear that criticisms – the idea of an American empire – were to be brushed off as “propaganda.” American diplomats say that the Iranian delegation turned down an opportunity for an “encounter” between the two leaders, citing that the Iranian side faced too many domestic complications to go ahead with the meeting. Other accounts say Rouhani didn’t turn up to the luncheon where such a handshake could have taken place because alcohol was served.

The Iranian side has yet to address why the encounter failed to take place, but even so, the magnitude of problems between the two countries will require more than an informal greeting and a symbolic handshake between US and Iranian leaders – and no side should really be blamed for the meeting not materializing. The substance of the issue is that the fundamental positions between the two leaders are so palpably disparate, so undeniably grounded in divergent visions of an international polity, that the idea of a historic and meaningful détente is nearly impossible to surmise. I can’t express enough to readers how much I would like to see a historic rapprochement, one that would be mutually beneficial to the two peoples if they were given the chance to stand as equals.

My visit to Iran last year took me to the elegant mosques of Esfahan, the majestic deserts of Yazd, and rustic mountainous landscapes of Abyaneh. During my stay, the rial plummeted by 40 percent, prompting a public protest from venders in the Tehran bazaar, and a rush to buy gold and US dollars. From car manufacturers and energy exporters, to carpet weavers and pistachio cultivators, everyone was feeling the burn of the unethical and unyielding international sanctions regime spearheaded by the Obama administration.

I sprained my ankle and spent a few days in my hotel room in Tehran keeping off my foot. The hotel cleaning women, a mother in her late 40s, upon discovering that I was traveling on a US passport, asked me why Obama was adopting a position that is so destructive to Iranian civilians. The woman was nearly in tears explaining how her savings had been substantially eaten into by the free fall of the rial and how hyperinflation was punishing average people. I didn’t know what to say, other than what I felt to be the truth.

The truth is that Washington is unwilling to recognize the Islamic Republic as a legitimate political entity, but as a regime that exists only to be changed by the reactionary US political establishment through overt and covert measures.

The values of Iran’s indigenous theocratic democracy are intolerable to Washington, and though Tehran has tangible shortcomings if one views their political landscape through the frame of Western liberal democracy, high public participation in elections and the ascension and massive popularity of President Rouhani suggest that the ruling political establishment is indeed viewed as legitimate in the eyes of the biggest stakeholders – Iran’s people.

Rouhani succinctly stated in his speech that the best way to overcome the Iranian nuclear hurdle is to simply allow Tehran to pursue its nuclear energy and research policies within the framework of the Nuclear non-Proliferation Treaty, to which it is the signatory. The solution couldn’t be any more straightforward; it entails all parties to transparently abide by international law.

Just as Rouhani assumed his position as president, the US simultaneously issued a new round of sanctions on Iran – consider it a token of goodwill from Washington. As political prisoners are pardoned, and Supreme Leader Ali Khamenei calls for “heroic flexibility,” Washington would truly be foolish to pass up this opportunity to mend fences.

Iran has indicated its willingness to operate and usher in a new diplomatic era with Washington on several occasions through cooperation over Afghanistan and other areas – all of which have been met with scant interest or outright hostility. It’s time for Obama to put down the reactionary talking points and visit Tehran. He should visit the humble quarters of the late Iman Khomeini; he should share dates and black tea with President Rouhani and bridge the differences.

Obama should stop the weapons flow to Syria’s opposition and work with Tehran and Moscow in promoting the Geneva-2 peace conference with no preconditions, resulting in internationally monitored elections in Damascus at a later date. Only a historic détente on an equal footing can rescue Obama’s disastrous foreign policy approach and his crumbling presidency.

Only when Obama feels the warmth of Iranian hospitality will he fully realize the extent of his foolish and unethical policies toward the Islamic Republic.

Nile Bowie is a Malaysia-based political analyst and a columnist with Russia Today. He also contributes to PressTV, Global Research, and CounterPunch. He can be reached at nilebowie@gmail.com.

Time Obama grew a decent set of balls and walked away from Nethanyahu who is hated both at home and abroad. Its clear enough to see that Israeli warmonger is going to self-destruct.

Obama grow a set of decent balls? Ha! That'll be the day! His bridal duties to Nitwit-Yahoo will never allow for growing balls. In that marriage, he's the one with his back on the bed. He's missionary with his main man pumping away on top. Get use to it.

Its not just Obama, America is full of Israeli brides. Almost every member of its Congress is wedded to Israel, ready to pull their pants down on Israel's say-so any time.

Its called tick fever and Israel is the naughty little flea that bred the multitude of ticks that now crawl all over that US ass and body.

eToro is the best forex broker for newbie and established traders.