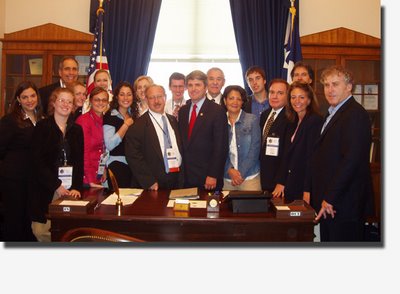 A leading voice of the pro-Israel lobby is pushing for an old-style “witchhunt”—under the guise of “homeland security”—to identify (and expel) individuals in the U.S. government and our military who are suspected of being hostile to Israel.

The call for a witch-hunt is based on the outlandish thesis that “Islamo-fascists” and Muslim “jihadist” operatives and, perhaps more particularly, their “sympathizers”—however loosely defined—have infested America’s defense, national security and federal law enforcement community.

The witch-hunt was proposed in the fall 2006 issue of the small-circulation—but highly influential—Journal of International Security Affairs published by the Jewish Institute for National Security Affairs (JINSA). JINSA has been one of the frontline forces in the fanatically pro-Israel “neo-conservative” circles directing foreign policy under George W. Bush.

University of Pennsylvania Prof. Edward Herman has described JINSA as “organized and [run] by individuals closely tied to the Israeli lobby and can be regarded as a virtual agency of the Israeli government.”

What first appears as commentary in JINSA’s Journal often leads to very real policies carried out by the Bush administration alone and sometimes in concert with Capitol Hill which some critics have been known to cynically call “Israeli occupied territory.”

The JINSA call for a witch-hunt came in the context of a series of commentaries on “21st Century Allies . . . and Adversaries” for the United States and Israel, which two nations, of course, are seen in the JINSA world view as virtual extensions of one another.

Zionist publications regularly assert that “anti-Israel” sentiments must automatically be seen as “anti-American” and even as “anti-Christian” in nature, a theme first loudly propagated by the American Jewish Committee’s Commentary magazine.

The commentaries, not surprisingly, named such countries as Iran, Syria, Russia and Venezuela, as possible “adversaries” for the U.S.-Israel Axis. However, it was an article by Walid Phares—who is associated with a Zionist lobby front known as the Foundation for the Defense of the Democracies—which made the suggestion that there are very real “adversaries” on American soil, at high levels in the American military and intelligence establishment. In his article “Future Terrorism—Mutant Jihads,” Phares asked:

“How deeply have jihadist elements infiltrated the U.S. government and federal agencies, including the Federal Bureau of Investigation, the Department of Homeland Security, the Department of Defense, and various military commands, either through sympathizers or via actual operatives?”

Although posed as a loaded question, Phares’s implication was clear: he believes such a “threat” exists. The JINSA writer then proclaimed the need for a “national consensus” that requires “confronting these forces” based on “knowledge of their ideologies, objectives and determination.”

Since there are few Muslim Americans or even Arab Americans in any substantial numbers in the FBI, Homeland Security, the Department of Defense, etc, the suggestion that “jihadist” elements have “infiltrated” our government might seem silly to the average American.

But in the fevered minds of JINSA and hard-line Zionist elements, the real concern is that there are growing numbers of people high up in the FBI and the CIA and in the military who are getting “fed up” with Zionist power in America. Top military leaders openly dismissed the need for war against Iraq and Iran, both wars of which have been long-time policy plans of the Zionist lobby. And all of this, in the view of the JINSA sphere, constitutes effective collaboration with and sympathy for the dreaded “jihadists.”

For example, on May 11, 2005, the New York-based Forward, a leading Jewish community newspaper, reported that Barry Jacobs of the Washington office of the American Jewish Committee said he believed there are high-ranking officials inside the U.S. intelligence community who are hostile to Israel and are waging war against pro-Israel lobbyists and their neo-conservative allies in the inner circles of the Bush administration.

Citing the ongoing FBI investigation of espionage by officials of the American Israel Public Affairs Committee (AIPAC), the leading pro-Israel lobby group, Forward reported that Jacobs believes, in Forward’s summary, that “the notion that American Jews and Pentagon neo-conservatives conspired to push the United States into war against Iraq, and possibly also against Iran, is pervasive in Washington’s intelligence community.”

Obviously, with such thoughts running rampant in pro-Israel circles, it is inevitable a leading pro-Israel policy group such as JINSA would raise the specter of “infiltration” by those who are seen as “sympathizers” and suggest that they be purged from their positions in government agencies.

So the threat of a witch-hunt happening is real. Despite differences between the Bush administration and its Democratic foes, both come together in one realm: satisfying the Israeli lobby which funds both Democrats and Republicans alike through a network of political action committees and exercising its clout on Capitol Hill through pressure groups such as the APIAC, the American Jewish Committee, the American Jewish Congress and the Anti-Defamation League.

It is ironic that JINSA should be the source of a demand for an investigation of foreign agents and sympathizers inside the American government. The founder of JINSA, Stephen Bryen, a former Senate aide on Capitol Hill, faced certain indictment on charges of espionage for Israel until pressure on the Justice Department forced Justice to back off.

Not only Bryen, but several others in the JINSA sphere were under FBI investigation on similar charges relating to their possible misuse of American defense and intelligence information on Israel’s behalf. They include:

• Richard Perle, investigated in the 1970s when he was a top aide to then-Sen. Henry Jackson;

• Douglas Feith, who—although later promoted to a high post in the Bush administration in 2001—was fired from the National Security Council of President Ronald Reagan; and

• Paul Wolfowitz, now head of the World Bank and former deputy secretary of defense in the Bush administration, investigated in the 1970s by the FBI on suspicion of passing classified information to Israel.

Not Copyrighted. Readers can reprint and are free to redistribute - as long as full credit is given to American Free Press - 645 Pennsylvania Avenue SE, Suite 100 Washington, D.C. 20003
Posted by Unknown at Monday, November 20, 2006

If you will visit the Powered by Christ Ministries site and click on "Roots of (Warlike) Christian Zionism (front page), you will feast on something the you-know-who people don't want you to read!