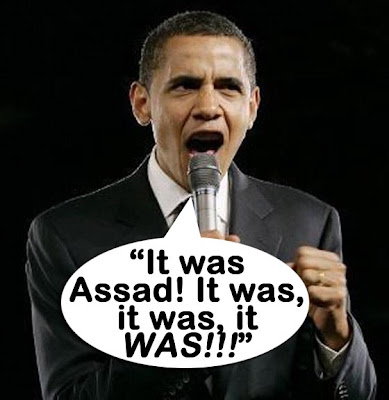 "A foolish President Obama and moronic Secretary of State Kerry have handed the United States government its worst diplomatic defeat in history and destroyed the credibility of the Office of the President, the Department of State, and the entire executive branch. All are exposed as a collection of third-rate liars.

Intoxicated with hubris from past successful lies and deceptions used to destroy Iraq and Libya, Obama thought the US “superpower,” the “exceptional” and “indispensable” country, could pull it off again, this time in Syria."~~~Paul Craig Roberts

A foolish President Obama and moronic Secretary of State Kerry have handed the United States government its worst diplomatic defeat in history and destroyed the credibility of the Office of the President, the Department of State, and the entire executive branch. All are exposed as a collection of third-rate liars. 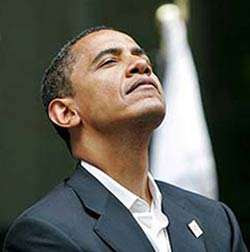 Intoxicated with hubris from past successful lies and deceptions used to destroy Iraq and Libya, Obama thought the US “superpower,” the “exceptional” and “indispensable” country, could pull it off again, this time in Syria.

But the rest of the world has learned to avoid Washington’s rush to war when there is no evidence. A foolish Obama was pushed far out on the limb by an incompetent and untrustworthy National Security Advisor, Susan Rice, and the pack of neoconservatives that support her, and the British Parliament cut the limb off.

What kind of fool would put himself in that vulnerable position?

Now Obama stands alone, isolated, trying to back away from his threat to attack without authorization from anyone–not from the UN, not from NATO, not from Congress who he ignored–a sovereign country. Under the Nuremberg Standard military aggression is a war crime. Washington has until now got away with its war crimes by cloaking them in UN or NATO approval. Despite these “approvals,” they remain war crimes.

But his National Security Advisor and the neocon warmongers are telling him that he must prove that he is a Real Man who can stand alone and commit war crimes all by himself without orchestrated cover from the UN or NATO or a cowardly US Congress. It is up to Obama, they insist, to establish for all time that the President of the United States is above all law. He, and he alone is the “decider,” the Caesar, who determines what is permissible. The Caesar of the “sole superpower” must now assert his authority over all law or Washington’s hegemony over the world is lost.

As I noted in an earlier column today, if Obama goes it alone, he will be harassed for the rest of his life as a war criminal who dares not leave the US. Indeed, a looming economic collapse could so alter the power and attitude of the United States that Obama could find himself brought to justice for his war crimes.

Regardless, the United States government has lost its credibility throughout the world and will never regain it, unless the Bush and Obama regimes are arrested and put on trial for their war crimes.

Obama’s destruction of US credibility goes far beyond diplomacy. It is likely that this autumn or winter, and almost certainly in 2014, the US will face severe economic crisis.

The long-term abuse of the US dollar’s reserve currency role by the Federal Reserve and US Treasury, the never-ending issuance of new debt and printing of dollars to finance it, the focus of US economic policy on bailing out the “banks too big to fail” regardless of the adverse impact on domestic and world economies and holders of US Treasury debt, the awaiting political crisis of the unresolved deficit and debt ceiling limit that will greet Congress’ return to Washington in September, collapsing job opportunities and a sinking economy all together present the government in Washington with a crisis that is too large for the available intelligence, knowledge, and courage to master.

The rest of the world–especially Washington’s bullied NATO puppet states–will take great delight in the discomfort of “the world’s sole superpower” that has been running on hubris ever since the Soviet collapse.

The world is not going to bail out Washington, now universally hated, with currency swaps, more loans, and foreign aid. Americans are going to pay heavily for their negligence, their inattention, their unconcern, and their ignorant belief that nothing can go wrong for them and that anything that does is temporary.

Two decades of jobs offshoring has left the US with a third world labor force employed in lowly paid domestic nontradable services, a workforce comparable to India’s of 40 years ago. Already the “world’s sole superpower” is afflicted with a large percentage of its population dependent on government welfare for survival. As the economy closes down, the government’s ability to meet the rising demands of survival diminishes. The rich will demand that the poor be sacrificed in the interest of the rich. And the political parties will comply.

Is this the reason that Homeland Security, a Nazi Gestapo institution, now has a large and growing para-military force equipped with tanks, drones, and billions of rounds of ammunition?

How long will it be before American citizens are shot down in their streets by “their” government as occurs frequently in Washington’s close allies in Egypt, Turkey, Bahrain?

Americans have neglected the requirements of liberty. Americans are so patriotic and so gullible that all the government has to do is to wrap itself in the flag, and the people, or too many of them, believe whatever lie the government tells. And the gullible people will defend the government’s lie to their death, indeed, to the death of the entire world.

If Americans keep believing the government’s lies, they have no future. If truth be known, Americans have already lost a livable future. The neocons’ “American Century” is over before it begun.

Update: I have heard from educated and aware friends that the presstitute media on the evening news are beating the drums for war. This shows what paid whores the US media is and their total disconnect from reality. Anyone who wastes their time on the US media is a brainwashed idiot, a danger to humanity.

Update 8:52 PM August 30: Is the White House idiot going to be a victim of his own careless presidential appointments?

Does he have no one to tell him how to escape the dilemma his moronic Secretary of State and National Security Advisor have put him in? Someone needs to tell the WH Fool that he must say that he accepts the conclusion of the world community that there is not sufficient evidence for launching a military attack on Syria and killing even more people than were killed in the alleged, but unproven, chemical attack, and that he awaits further and better evidence.

God help the moron and the unfortunate country that the fool represents.

Paul Craig Roberts was Assistant Secretary of the Treasury for Economic Policy and associate editor of the Wall Street Journal. He was columnist for Business Week, Scripps Howard News Service, and Creators Syndicate. He has had many university appointments. His internet columns have attracted a worldwide following. His latest book, The Failure of Laissez Faire Capitalism and Economic Dissolution of the West is now available.

Obama is the classical showing of a world gone insane. How could anyone tolerate him or what he represents which is definitely not the American people.

A sane world would have put him away where the sun don't shine.

eToro is the ultimate forex trading platform for new and pro traders.