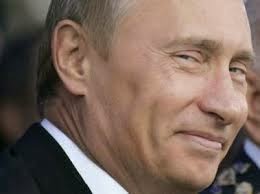 Meanwhile, on the sidelines, McCain was telling reporters: “If we had provided Ukraine with weapons, they wouldn’t have had to use cluster bombs.”

[Darkmoon]When Ukrainian army officers came to the Ukrainian village of Velikaya Znamenka to tell the men to prepare to be drafted, they weren’t prepared for what happened next. As the commanding officer was speaking, a woman seized the microphone and proceeded to tell him off: “We’re sick of this war! Our husbands and sons aren’t going anywhere!”

She then launched into a passionate speech, denouncing the war, and the coup leaders in Kiev, to the cheers of the crowd.

What she did is now a crime in Ukraine: the only reason she wasn’t arrested on the spot is that the villagers wouldn’t have permitted it. But in Ukrainian Transcarpathia, well-known journalist for Ukrainian Channel 112 Ruslan Kotsaba has been arrested and charged with “treason” and “espionage” for making a video in which he declared: “I would rather sit in jail for three to five years than go to the east to kill my Ukrainian brothers. This fear-mongering must be stopped.” Kotsaba may sit in jail for twenty-three years, the prescribed term for the charges filed against him.

Kotsaba’s arrest is part of a desperate effort by the Ukrainian government to intimidate the growing antiwar and anti-draft movement, which threatens to upend Kiev’s dreams of conquering the rebellious eastern provinces.

Kotsaba’s particular crime, according to prosecutors, was in describing the conflict as a civil war rather than a Russian “invasion.” This is a point the authorities cannot tolerate: the same meme being relentlessly broadcast by the Western media – that an indigenous rebellion with substantial support is really a Russian plot to “subvert” Ukraine and reestablish the Warsaw Pact – now has the force of law in Ukraine.

Anyone who contradicts it is subject to arrest.

Also subject to arrest: the thousands who are fleeing the country in order to avoid being conscripted into the military.

In a Facebook post that was quickly deleted, Defense Minister Stepan Poltorak wrote: “According to unofficial sources, hostels and motels in border regions of neighboring Romania are completely filled with draft dodgers.”

President Petro Poroshenko, the Chocolate Oligarch, is readying a decree imposing possible restrictions on foreign travel for those of draft age – which means anyone from age 25 to 60.

Ukrainians may soon be prisoners in their own country – but they aren’t taking it lying down.

Draft resistance is at an all-time high: a mere 6 percent of those called up have reported voluntarily.

This has forced the Kiev authorities to go knocking on doors – where they are met either with a mass of angry villagers, who refuse to let them take anyone, or else ghost towns where virtually everyone has fled.

In the Transcarpathia region of western Ukraine, entire villages have been emptied, the inhabitants fleeing to Russia to wait out the war – or the fall of the Kiev regime, whichever comes first.

“It may seem a paradox,” says Transcarpathia’s chief recruitment officer, “but from the western Ukrainian region of Ternopyl people have fled to Russia in order to escape army conscription.”

The frantic Ukrainian regime is now contemplating conscripting women over 20.

Poroshenko’s military mobilization is due not only to numerous setbacks in the east – Ukrainian troops are being pushed back on all fronts by highly motivated rebels defending their own towns and villages – but also because thousands are deserting, throwing down their arms and fleeing to Russia.

In response, the Ukrainian parliament has passed a law authorizing local commanders to shoot deserters on the spot.

With Poroshenko’s war looking like a major disaster, one that could easily topple his EU/US-installed regime, the War Party in the US is turning up the heat, demanding that Washington provide Kiev with arms.

Senator John McCain is – naturally – leading the charge, but prominent liberals are also in the front ranks, with leading scholars of the Brookings Institution recently calling for heavy weapons to be sent.

The Obama administration is under considerable pressure from within the President’s own party to start arming the Ukrainian army, but America’s European allies are reluctant to let this war go on much longer, especially now that their sock puppet Poroshenko is increasingly unpopular.

With protests erupting all over western Ukraine, Germany’s Angela Merkel is openly opposing escalation of the war. She made that clear at a recent conference in Munich, where Merkel spoke after returning from talks with Russia’s Vladimir Putin and French President Francois Hollande.

Meanwhile, on the sidelines, McCain was telling reporters: “If we had provided Ukraine with weapons, they wouldn’t have had to use cluster bombs.” 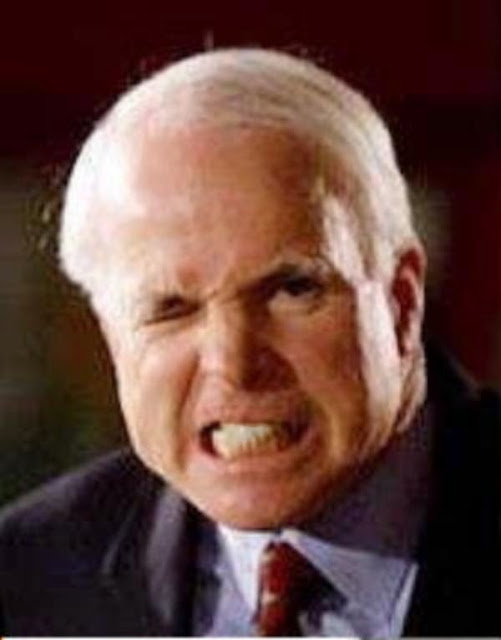 They don’t call him “Mad John” for nothing

The United States is providing the Kiev regime with military training, and we already have American boots on the ground there, ostensibly to “strengthen the rule of law.” What that means in practice is that we are bolstering a government that has declared war on its own people, and is rapidly closing off all legal means of dissent – charging political opponents with “treason,” banning political parties, and unleashing ultra-nationalist mobs on anyone who dares dissent.

Ukraine is a tripwire that could easily set off World War III – and US provocations are edging closer to that by the day. The crisis was initiated by Washington’s regime-change campaign which succeeded in violently overthrowing elected President Viktor Yanukovych, whose electoral victory was made possible by the criminal incompetence and outright thievery of his predecessor, US-supported Viktor Yushchenko.

The so-called “Orange Revolution” led to economic chaos, rampant corruption, and the unleashing of a virulent nationalist current that has culminated in the rise of open neo-Nazis taking seats in the Ukrainian parliament. We are seeing its openly fascistic culmination in the current gang lording over Kiev.

All this was done in the name of sticking a finger in Vladimir Putin’s eye, whose great sin has been kicking out thieving oligarchs and opposing US pretensions to global hegemony.

Washington’s ultimate goal is regime-change in the Kremlin, and the reinstallation of a Yeltsin-like sock puppet who, when Washington says “Jump!”, will answer: “How high?”

That they’re willing to risk World War III in order to achieve their goal underscores the sheer craziness of US foreign policy.

The US has no business interfering in Ukraine’s civil war, and no legitimate security interest in the question of who gets to administer Crimea – which has been Russian since the days of Catherine the Great.

The idea that we are going to confront Russia over this issue is dangerous nonsense – and, unfortunately, it is just the sort of nonsense politicians of both parties find hard to resist.

The main danger to liberty and peace in the world isn’t in the Kremlin, or Peking, or North Korea – it’s right here in these United States of America, in the global epicenter of evil otherwise known as Washington, DC.

The Founding Fathers of this country are rolling in their graves as the usurpers in Washington sully the good name of America with the blood of innocents worldwide and defile the Constitution in the process.

True Americanism means opposing these monsters as they rampage over the earth and destroy our civil liberties at home, while engaging in endless wars of aggression in other countries.