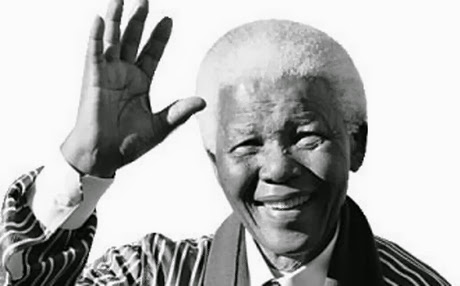 "He will be sorely missed by all who cherish love, peace and freedom the world over and will be eternally honoured for his immense contribution to the dismantling of the apartheid policy, one of the world’s most obnoxious systems whose under-pining philosophy was the degradation of man by man. Dr. Mandela served as a source of inspiration to oppressed peoples all over the world. In the course of his life-long epic struggle for freedom, fairness, justice, equity and the human rights of his oppressed people, Dr. Mandela made unparalleled personal sacrifices. The indefatigable spirit which he demonstrated throughout his life will continue to inspire present and future generations."~~ Dr. Goodluck Azikiwe Jonathan, President of the Federal Republic of Nigeria.

"Mandela, having gone through the most difficult ordeals, was committed to the end of his days to the ideals of humanism and justice," "A whole era of modern African history is connected with the name of Nelson Mandela, which is marked by victory over apartheid and building the democratic South Africa,"~~ Vladimir Putin, Russian President.

“A man who took history in his hand, and bent the arc of the moral universe toward justice.”
“We will not likely see the likes of Nelson Mandela again.”~~ Barak Obama, President, United States of America

"Nelson Mandela was a wonderful man. He was wise, warm-hearted and humorous. I had the pleasure to experience these traits personally when meeting him, an experience that is still vivid for me. That encounter is one of the most prized memories of my political career. Nelson Mandela was convinced that it is neither hatred nor vengeance that turn the world into a better place, but reconciliation and peaceful change. He lived it. This is why he is a giant of history, a statesman with a message resonating in all countries and for all times."~~ Angela Merkel, German Chancellor.

“Tonight, a bright light has gone out in the world. Nelson Mandela was not just a hero of our time, but a hero of all time.”~~ David Cameron, British Prime Minister.

“In his time as President he helped South Africa come to terms with its past, and, through reconciliation, built the foundations for a stronger nation,”~~ John Key, New Zealand Prime Minister.

"[Mandela’s legacy] will continue to inspire fighters for freedom, and to give confidence to peoples in the defense of just causes and universal rights,”~~ Francois Hollande, French President.

“As President, I watched in wonder as Nelson Mandela had the remarkable capacity to forgive his jailers following 26 years of wrongful imprisonment — setting a powerful example of redemption and grace for us all.”
“He was a man of tremendous moral courage, who changed the course of history in his country,”~~ George H.W Bush, former president of the United States.

“All of us are living in a better world because of the life of Madiba,”~~ former US President Bill Clinton.

“Nelson Mandela showed what is possible for our world and within each one of us – if we believe, dream and work together,”~~ Ban-KI Moon, UN Secretary General.

“A capable statesman, comfortable with compromise and impatient with the doctrinaire.”
“An international emblem of dignity and forbearance.”~~ Former New York Times executive editor, Bill Keller.

"Nelson Mandela, who died on Thursday at age 95, fully deserved the legendary stature he enjoyed around the world for the last quarter-century of his life. He was one of the most extraordinary liberation leaders Africa, or any other continent, ever produced. Not only did he lead his people to triumph over the deeply entrenched system of apartheid that enforced racial segregation in every area of South African life; he achieved this victory without the blood bath so many had predicted and feared."~~ The New York Times Editorial.

“Mandela dismantled the strong web of racist ideas, with which certain Western thinkers had sought for more than a century to rationalize the subjugation of others through colonialism, segregation and disenfranchisement.”
“[It's] more important than ever – in a century marked so far by frightening eruptions of terror and religious intolerance – to keep before the world the name and example of Nelson Mandela.”~~ Washington Post Editorial. 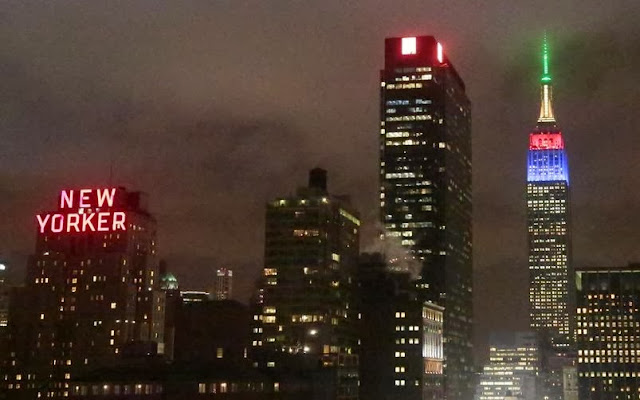 The Empire State Building lit in the colors of the South African Flag in memory of Nelson Mandela
Mandela, a "would-be Lenin who became Africa’s Vaclav Havel.”
An “all too rare example of a wise revolutionary leader.”
“Age mellowed him. He walked out of jail an African Havel…He opened up (South Africa’s) economy to the world, and a black middle class came to life,”~~ The Wall Street Journal.

“Nelson Mandela, conscience of the world,”
Mandela “was more than just a symbol. His name was a clarion call for people across the globe in their struggles against oppression.”
“He personified the triumph of nearly unimaginable perseverance over nearly unimaginable tribulation.”
“His top priority was to oversee the creation of a new constitution, guaranteeing equality for all.”
“He also brought together disparate elements of the country, black and white, to address the grinding poverty and homelessness that afflicted his country.”
"If one person could be called the conscience of the world, it would be Nelson Mandela.”
“The best way for us to truly honor his life, his suffering, and his memory is to uphold the values he embodied and fight the injustices he forced the world to confront. His inspiration is universal, his legacy timeless.”~~ The Chicago Tribune.

“one of the towering figures of the 20th century.”
“(H)e was revered around the globe for his vision and courage, and for the enormous personal sacrifices he made to right the wrongs that plagued his country,”~~ The Los Angeles Times.

"Nelson Mandela: a leader above all others"
"His character, and a life that kept him off stage for a long period, produced an almost unique mixture of wisdom and innocence"~~ The Guardian.

To all the roaches crawling out of the woodwork, now daring to say that which they could not when Mandela lived, even for them Madiba has some useful advice:

“We must use time wisely and forever realize that the time is always ripe to do right.”

“I wanted to be known as Mandela, a man with weaknesses, some of which are fundamental, and a man who is committed, but nevertheless, sometimes he fails to live up to expectations”

“I’m not a saint, unless you think that a saint is a sinner who keeps on trying.”~~ Nelson Mandela.

To the very end, Mandela's humanity and humility saw him through. Rest in perfect peace Madiba~~ Egoigwe.

Truly a remarkable and lovely man

Israel is having fits at the world ignoring its attempts to demonize this great world icon. They are behind all the stories about his being in bed with the CIA etc.

Ha! How woefully they have failed. Israel's entire leadership clan will never see the type of global height in morality that our blessed Madiba attained. Shame on you Israel, shame on you Nethanyahu!