"Despite previous assurances to the contrary, it is now clear that DfID was indeed responsible for breaching the anonymity of my constituent after he came forward to raise serious concerns about CDC-backed investments in Nigeria. As a result, Mr Oloko has been subjected to covert surveillance by a private investigator hired by Emerging Capital Partners, one of the private equity firms involved in the case. The fact that this anti-corruption campaigner was unable to blow the whistle without impunity on UK soil is completely outrageous."~~MP, Caroline Lucas

A whistleblower whose identity was disclosed to a private equity firm he accused of corruption has been offered an unreserved apology by the government.

British-born Nigerian campaigner Dotun Oloko, who lives in Brighton, provided the Department for International Development (DfID) with information concerning the alleged misuse of aid cash in 2009. 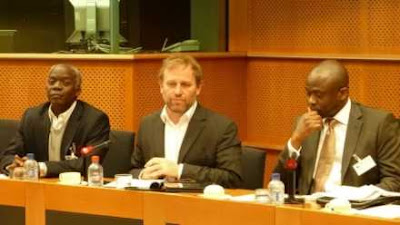 Despite securing guarantees that the source of the complaints would not be revealed, documents that allowed his real name to be identified were passed on to the firm by officials.

As a result he was targeted by private investigators employed and told BBC2's Newsnight that he feared "retribution" if he returned to Nigeria.

A review has been launched by the international development secretary, Andrew Mitchell, in a bid to prevent a repeat.

Mitchell said: "This happened under the last government but it is vital that whistleblowers should be able to report their concerns with impunity.

"In this case it has come to light that in 2009, while investigating this individual's claims, DfID inadvertently sent on an electronic document without being aware that the individual's name could be found in that document's electronic properties."

The document was first sent on to the government-owned development fund CDC, which then forwarded it to the firm concerned for comment.

"While I am confident DfID acted in good faith to protect his identity, this should not have happened. We apologise unreservedly and are very sorry for any distress caused," he said.

"The coalition government has a zero-tolerance approach to corruption and places the highest priority on efforts to tackle it.

"I have immediately ordered a review of departmental processes to learn the lessons of this case and ensure that whistleblowers who wish to remain anonymous will always be afforded the protection they deserve."

Without a doubt, the intent was to cause Mr Oloko and his family serious harm and perhaps even death. What the British government did, in Her Majesty's service, was evil as evil does.

This is exactly why corruption thrives, both in the West and in third world countries. It is encouraged by dubious institutions which the West's MSM promote as unscrupulous when they are nothing but wolves in sheep's clothing.