Who is sending the guns to Nigeria?

Who is sending the guns to Nigeria?

As Nigerians were on the street protesting over fuel subsidy removal, a British based man was being arraigned in UK over the shipping of 80,000 rifles and pistols and 32 million rounds of ammunition to Nigeria. The shipment included 40,000 AK47 assault rifles, 30,000 rifles and 10,000 9mm pistols.

According to a report by the BBC, the man whose name is Gary Hyde, shipped these huge arm cache without receiving permission from the relevant government department in the UK. 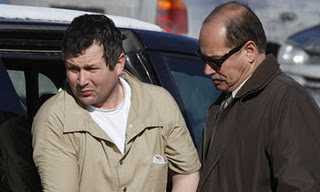 Gary Hyde was not alone in this deal. It was carried out with his business partner Karl Kleber, a German national based in Germany, the court was told.

The pair acted as middle men between two Polish companies acting for the Nigerian buyers and Chinese companies, the court heard, according to the BBC report. Both men received commission payments for the deals totaling around $1.3m (£840,000) or N351 million.The story apparently left several questions unanswered. Who were the Nigerian buyers? Were these guns really delivered to Nigeria eventually? 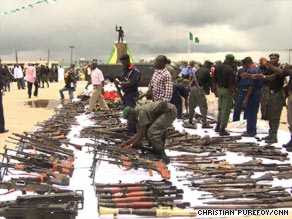 It is also interesting that since this story broke out in the British media, the Nigerian government has not come out with any specific statement on it. Were these weapons imported by the Nigerian government? If they were not imported by the Nigerian government, have they made any efforts to trace the importers of these large numbers of weapons into the country? Thirty two million rounds of ammunition are enough to kill thirty two million Nigerians, assuming each bullet will kill a Nigerian? This may be an exaggeration, but there is no doubt that if there is this amount of guns and ammunition out there outside the control of the government, then every Nigerian has a serious course to be worried at this time.

The reputation of Gary Hyde, the man at the centre of the storm shows that Nigerians have to be concerned that he has set his eyes on supplying arms to the country. A report in February 2011, in The Observer in UK, shows that Hyde is also facing charges in the US for smuggling arms into the country. The Observer describes him as “Britain’s very own lord of war; an international arms dealer, whose chief currency is the AK-47 assault rifle”

The Observer reports that US officials arrested Hyde in connection with the alleged illegal import into the US of almost 6,000 Chinese-produced AK-47 magazines, each capable of holding up to 75 rounds of ammunition.

The Observer also quotes a Wiki leaks release of confidential US embassy cables which shows that in 2008 York Guns, where Gary Hyde is a director, tried to ship 130,000 of the assault rifles to Libya. The WikiLeaks revelation shows that Gary Hyde through his company acted as an intermediary between an unidentified Ukrainian arms manufacturer and Libyan officials. “The size of the deal raised eyebrows in diplomatic circles, as Libya has only 70,000 ground-force troops and these would be unlikely to use a weapon as dated as the AK-47. The cable noted that the export licence was rejected because the “UK is concerned that the intention may be to re-export the weapons, particularly to armed rebel factions backed by Khartoum and/or Ndjamena in the Chad/Sudan conflict”.

Kleber, Gary Hyde’s German partner also has a reputation that does not sit well with the authorities. The Observer reports that “in 2008 the German federal police agency, the BKA, launched an investigation into Kleber to determine whether he had been involved in “the illegal sale of machine guns via Croatia to Iraq”. This was in response to allegations that companies linked to Hyde had sold tens of thousands of guns to Ziad Cattan, the former head of military procurement at the Iraq Defence Ministry, without an appropriate arms brokering licence. Cattan fled Iraq after a warrant was issued for his arrest amid allegations that he had siphoned off millions of dollars in corrupt deals.

What emerges from these reports is that the two men now being named in connection with supply of arms to Nigeria should raise serious concerns in Nigeria. Have they supplied some other arms into the country, that the authorities are not aware? 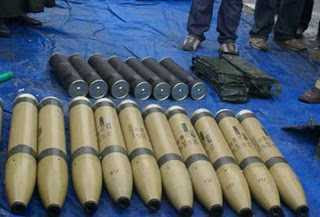 The concern becomes even more real considering the fact that at the same time Gary Hyde was being arraigned in UK, the Ghanaian authorities intercepted a truck loaded with arms and ammunition heading to Nigeria. The ammunition included pump action rifles and live rounds.

UPDATE. The BBC 19 January, 2012: The trial of an arms dealer accused of helping to organise a shipment of arms, from China to Nigeria, without the necessary licence has collapsed.

Gary Hyde, of Mask Lane, Newton on Derwent near York, had been on trial at Southwark Crown Court in relation to the 2007 shipment of thousands of guns and millions of bullets. Mr Hyde had denied the charges. The judge discharged the jury on Thursday, saying he had concluded the case had to "fail in law".

The court had been told the shipment was made up of 40,000 AK47 assault rifles, 30,000 rifles and 10,000 9mm pistols, along with 32 million rounds of ammunition. The prosecution had argued that as the shipment had been partly arranged and organised from the UK by Mr Hyde, it required a licence from the Department of Business, Innovation and Skills.

Mr Hyde had denied two charges of breaching the Trade in Goods (Control) Order 2003 and one charge of concealing criminal property. His defence team had told the court that Mr Hyde was not somebody who sticks "two fingers up" at the regulations.

The judge, Nicholas Loraine-Smith, told the court on Thursday that he was discharging the jury. He said: "I have come to the conclusion that this case has to fail in law, on the particular facts of this case." He added that it related to the framing of the order concerned, which had been replaced in 2009.

I will really be alarmed to hear that China is part of the destabilization in Nigeria. It most definitely cannot augur well for them to be part of this. My greatest fear is that this may be in reaction to the fact that America seeks to oust them from the new economic scramble that is going on in Africa. Apparently too, there is an oil war going on in our country in which proxies are being used to score points.

Gary Hyde looks to be some kind of agent to me. I think buying the guns from China was calculated to throw China in bad light and make it look bad to us; to give a dog a bad name and hang it on the scaffold of Nigerian public opinion. China does not indulge in these kind of game, they bring development and never bloodshed. I cannot say the same for America (CIA) or Israel (Mossad) to whom our president ran with open arms.

The guns coming from China cannot impute that the Chinese gov had any hand in it. There are unscrupulous business men everywhere and China is no exception.

When I recall that it was being rumoured that Jonathan sent that imfamous militant, Dukobo, to go and seize off shore wells in the Delta, I will argue that given the non-response of his administration to this scary news that perhaps, just perhaps, those guns were being purchased for N/D militants that already turned in their old weapons for amnesty grants. Boko Haram I'm sure already has open channels for fretting weapons into the country through the Sahara and M/E countries.

@poster 5: I can see your point of view, especially when you realize that there is no mention of who the Nigerian contacts are and that the Nigerian government does not seem to be pursuing this lead, at least not publicly. This should be front page news here but everything is so muted.

Bola, you cannot dwell on rumours, there are several groups in Nigeria who may have the need to import guns. The Christian Assn of Nigeria (CAN) already asked Southerners to protect themselves by all means possible. The Igbos in the S/E are not finding things funny and are being killed as well by this bloody group, even Moslems too, so no-one can really say who is bringing the guns to Nigeria.

I think it is the Southerners, Moslems will not bring guns through Ghana, they will use Niger. Most of the successful business men in Niger, Chad and Sudan are gun-runners. There is an available market for Northerners in that area but not for Southerners unless they go through Northerners. Ghana is not Northern route.

Simply unbelievable! That pretty country is going to the dogs, just like Libya, and whose fingerprints do we find all over the place? The same bunch of known instigators; US, UK, Israel.

Whatever people's assumption its clear to Nigerians US, UK, Israel and Nigerian govt have put head together to destroy our country. We shall continue to pray for God's urgent intervention.

This is really war preparrtion oh God see us through pls this people r crazy,hmm may our soul rest in peace.

This is not funny at all,nigerian government knows what thwy are doing.the question is who supply weapons to the Boko Haram, the niger delta militant and jos youth? This government are total failure to its people, pls check out the crisis tHat happening in the northern nigeria and tell me if the govt are not the ones responsibles for all that act and why not the US and UK mention names of those nigerian agents who are involve in the impotations of those ammunitions and nothing is being don about it!

2)More christains were caught in d act of bombings (churches& other targets) than muslims since d begining of security situation in d country.

5)GEJ not keen on fighting curruptn n equally not ready to obviously stolen funds. On n on n on !!!??

Well, i would say who is sending the Guns to Nigeria and all over the world?