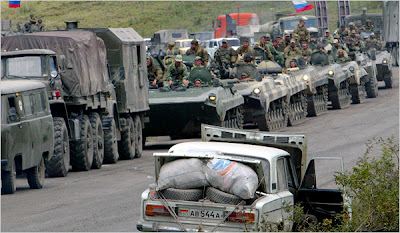 “The Georgians told them, ‘We’re done. Let us withdraw,’ ” one American military official said. “But the Russians are not letting them withdraw. They are pursuing them, and people are seeing this.”

TBILISI, Georgia — Russia expanded its attacks on Georgia on Sunday, moving tanks and troops through the separatist enclave of South Ossetia and advancing toward the city of Gori in central Georgia, in its first direct assault on a Georgian city with ground forces during three days of heavy fighting, Georgian officials said.

The maneuver — along with bombing of the Georgian capital, Tbilisi — seemed to suggest that Russia’s aims in the conflict had gone beyond securing the pro-Russian enclaves of South Ossetia and Abkhazia to weakening the armed forces of Georgia, a former Soviet republic and an ally of the United States whose Western leanings have long irritated the Kremlin.

Russia’s moves, which came after Georgia offered a cease-fire and said it had pulled its troops out of South Ossetia, caused widespread international alarm and anger and set the stage for an intense diplomatic confrontation with the United States.

Two senior Western officials said that it was unclear whether Russia intended a full invasion of Georgia, but that its aims could go as far as destroying its armed forces or overthrowing Georgia’s pro-Western president, Mikheil Saakashvili.

“They seem to have gone beyond the logical stopping point,” one senior Western diplomat said, speaking anonymously under normal diplomatic protocol.

The escalation of fighting raised tensions between Russia and its former cold war foes to their highest level in decades. President Bush has promoted Georgia as a bastion of democracy, helped strengthen its military and urged that NATO admit the country to membership. Georgia serves as a major conduit for oil flowing from Russia and Central Asia to the West.

But Russia, emboldened by windfall profits from oil exports, is showing a resolve to reassert its dominance in a region it has always considered its “near abroad.”

The military action, which has involved air, naval and missile attacks, is the largest engagement by Russian forces outside its borders since the collapse of the Soviet Union.

Russia escalated its assault on Sunday despite strong diplomatic warnings from Mr. Bush and European leaders, underscoring the limits of Western influence over Russia at a time when the rest of Europe depends heavily on Russia for natural gas and the United States needs Moscow’s cooperation if it hopes to curtail what it believes is a nuclear weapons threat from Iran.

President Bush, in Beijing for the Olympics, strongly criticized the Russian attacks, especially those outside South Ossetia, and urged an immediate cease-fire.

In an interview on NBC on Monday morning, he said he had been “very firm” with both Russia’s prime minister, Vladimir V. Putin, and its president, Dmitri Medvedev.

Earlier, Vice President Dick Cheney expressed a strong warning for Russia. In a telephone conversation with the Georgian president, he said “that Russian aggression must not go unanswered, and that its continuation would have serious consequences for its relations with the United States, as well as the broader international community,” a spokeswoman, Lea Anne McBride, said in a statement released by the White House.

Russian officials say Georgia provoked the assault by attacking South Ossetia last week, causing heavy civilian casualties. But Western diplomats and military officials said they worried that Russia’s decision to extend the fighting and open a second front in Abkhazia indicated that it had sought to use a relatively low-level conflict in a conflict-prone part of the Caucasus region to extend its influence over a much broader area.

On Sunday, Russian artillery shells slammed the city of Gori, a major military installation and transportation hub in Georgia. In the separatist region of Abkhazia, Russian paratroopers and their Abkhaz allies battled Georgian special forces and tried to cross the boundary into undisputed Georgian territory, Georgian officials said.

Russia dropped a bomb on Tbilisi’s international airport shortly before Foreign Minister Bernard Kouchner of France, who was sent by the European Union to try to mediate, was due to land, Georgian officials said. It twice bombed an aviation factory on the outskirts of the capital. Russia’s Black Sea Fleet patrolled the coast of Abkhazia, and its Defense Ministry said Russian warships had sunk a Georgian gunboat that fired on them.

The Kremlin declined to say whether its troops had entered Georgia proper but said all its actions were intended to strike at Georgian military forces that had fired on its peacekeeping troops in South Ossetia.

A senior Russian defense official, Anatoly Nogovitsyn, said early Sunday that Russia did not intend to “break into” Georgian territory.

The Bush administration said it would seek a resolution from the United Nations Security Council condemning Russian military actions in Georgia.

In a heated exchange with his Russian counterpart at the United Nations, Ambassador Zalmay Khalilzad of the United States accused the Kremlin of seeking to oust President Saakashvili.

He charged that Russia’s foreign minister, Sergey Lavrov, had said as much Sunday morning in a telephone conversation with Secretary of State Condoleezza Rice, telling her “that the democratically elected president of Georgia ‘must go,’ ” Mr. Khalilzad said. Mr. Khalilzad said the comment was “completely unacceptable.”

In Washington, American officials said that Georgian troops had tried to disengage but that the Russians had not allowed them to.

Well, what did the silly fools expect? That America will come running to their aid? They sure miscalculated and they better be praying that Russia doesn't decide to take them over completely. That's the price to pay when you go listening to Israel, and to think that Georgia is home to the Ashkenazi Jews-perhaps a small sacrifice for the Rothchilds' global dominance?

Spot-on! All wars, big and small is about the Rothchilds and by them. Consider: Gutle Schnaper, Mayer Amschel Rothschild’s wife before her death nonchalantly stated, "If my sons did not want wars, there would be none." For them, everything is expendable! And the nation that stands in their way of global domination is America-too much freedom and too much cash to overcome, so the key is to weaken it and buy it up for a few pennies.

It's the only country that is, perhaps, richer than the Rothchilds, even though they own its Federal Reserve Bank, the American constitution and laws make it impossible for them to overcome-so these binding cords have to be untangled and it is no surprise that George Bush calls it a mere piece of paper.

That's exactly why New York is to be the New Jerusalem from where they will rule the world and America, the Promised Land. Israel is the Rothchilds decoy and personal country, bought and paid for, in return for British financing for war reconstruction, which is the Rothchilds primary business and the only reason why they instigate wars is because they profit astronomically from them.

Historically, Jews are satanic gypsies who flourish under the cloak of religion or Christianity to be more precise. Ashkenazi Jew, Harold Rosenthal, aide to Ashkenazi Jew, Senator Jacob Javits, states: "Most Jews do not like to admit it, but our god is Lucifer."

Some more interesting facts; we now know that Hitler's father was the illegitimate child of the Rothchilds and was born at their magnificent palace in Austria, were his mother worked as a servant to the Rothchild family.

Could someone let me know if it's true that Kofi Annang, past Sec-Gen to the U.N, is married to a Rothchilds girl?

Oh wow! Thanks, quite some lucky guy.

You think but at what price?